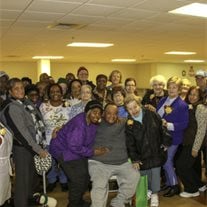 In Loving Remembrance Of Willie Carlton Cook October 25, 1964 – April 1, 2020 Willie Carlton Cook triumphantly entered this world on October 25, 1964, as the son of Gay Lynn Cook & Wille C. Davis. Willie was a commanding presence, illuminating pathways wherever he went and adorning rooms with his personality. An engaging individual, Willie used his God-given character to his advantage as an Entrepreneur and Owner of Simply Delicious Catering. Willie accepted the Lord and Savior Jesus Christ at an early age and was reared in the Family of Faith at the St. Paul Baptist Church of Passaic, NJ. Ministry assignments included serving as Chairperson of the Kitchen Committee, and he availed his talents as often as requested. As Willie’s convictions grew, he later united with the Community Baptist Church of Englewood, under the leadership of Rev. Dr. Lester W. Taylor, Jr., where he worshiped until the Lord called him home. With a heart of gratefulness, Willie sought out opportunities to be of service to others and utilizing his culinary skills, diligently worked annually by offering his time, talent, and services to the community during the Thanksgiving Homeless & Seniors’ Luncheon. Willie was also known to assist families during their time of bereavement by providing them with his decadent delights, delicious foods, and desserts. A well-traveled individual, Willie found pleasure in every aspect of his life, and he literally lit up a room, never dimming his light but rather allowed it to shine as bright as the Creator had designed. No matter how small or large, Willie was a soul larger than life. Willie’s work on Earth was done, and he quietly departed this life for Heaven’s gain, on April 1, 2020. Awaiting Willie at Heaven’s Gates were: His Parents, Gay Lynn Cook and Willie C. Davis; Maternal Grandparents, Jesse and Alma Hicks; Paternal Grandparents, Artie and Sarah B. Davis and a Godson, Khalil Bunting. Remaining on Earth to enjoy precious memories are his Brothers, Jimmy John Cook, Marcus Cook, and Sylvester Cook; Sister-In-Law, Cynthia Cook; Sister, Zena Cook; Aunts and Uncles, Johnnie (Butch) Cook, Burlington, NJ; Diane Cook, Passaic, NJ; Pastor Joseph H. & Linda Cook, Aiken, SC; Mary Jane Walker, Englewood, NJ; Eula Washington, Passaic, NJ; Beverly Ann Tomlinson, Silver Spring, MD; a devoted cousin, Eric Ellen; loving friends, Madonna, Shyron Wade, Tyrone Hill, and Trina Mann-Araujo, as well as an abundance of other family, and lifelong friends. “A Little while, and ye shall not see me: and again, a little while, and ye shall see me, because I go to the Father” ~ John 16:16

The family of Willie Carlton Cook created this Life Tributes page to make it easy to share your memories.

Send flowers to the Cook family.