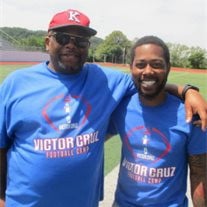 The unexpected passing of my brother still has me in a shocked state of mind.... I just wanna say for myself , Our Entire Family , Friends and kids that you coached In Clifton, Passaic , St. Mary’s , Teaneck, Barringer , Clifton Boys and Girls... View Obituary & Service Information

The family of Walter Benjamin "Billy" Munk Jr. created this Life Tributes page to make it easy to share your memories.

The unexpected passing of my brother still has me in a shocked...