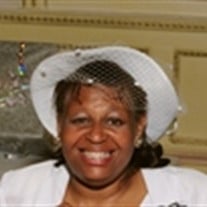 Vanessa Joan Lawson , 56 of Paterson, NJ completed her earthly assignments on Sunday April 18, 2015 at Lakeview Advanced Care Center in Wayne, NJ after a brief illness. She was born in Paterson, NJ to James Lawson and Ella Ruth Johnson. She received her education in the Paterson Public School system. Vanessa gave birth to four lovely children (Aquilla, Donald Jr., Chris, and Vanetta) all of whom were her pride and joy. She was a loving and devoted wife, mother, and grandmother. She loved her family without reservation and she always believed that people should be treated with respect. She was a long time member of St. Luke’s Baptist Church until family obligations and personal responsibilities consumed her time, but her faith in God was never challenged. Vanessa has always known God even from an early age. She was a woman of strong faith and that faith helped her to endure many hardships. She sacrificed her own wellbeing to ensure that her family received the best that she had to offer. As stated by her children “she cared so much for everyone else, she forgot to care about herself.” We can all be encouraged by her life as she was always a very loving, sweet, adorable, and caring person. Her personality from infancy earned her the title of “Sweetcake”. She was strong, committed, and faithful to her beliefs. She never backed down from supporting her children in any decision they chose to make. She continued to love and support them by showing them that there was a better way to life. Vanessa was preceded in death by her father James Lawson, mother, Ella Ruth Johnson, and sister Delphine McCombs. She leaves to cherish her memories, husband Donald Hadder, two sons Donald Jr. and Chris Lawson, two daughters Aquilla and Vanetta Lawson, sisters Sandra Johnson-Spruill (Gideon) and one brother Rufus McCombs Jr, three nieces Tasha Johnson, Assata McCombs, Sakina Gleason, three nephews Terence Johnson, Wali McCombs, Darrell Gleason, three great-nieces Shani Gaylord, Na’Zyia Johnson, and I’janiyah McCombs, Camilla McCombs, grandson Xa’geir Dreher, and a host of family and friends. To send flowers to the family or plant a tree in memory of Vanessa J Lawson , please visit our Heartfelt Sympathies Store.

Vanessa Joan Lawson , 56 of Paterson, NJ completed her earthly assignments on Sunday April 18, 2015 at Lakeview Advanced Care Center in Wayne, NJ after a brief illness. She was born in Paterson, NJ to James Lawson and Ella Ruth Johnson. She... View Obituary & Service Information

The family of Vanessa  J Lawson created this Life Tributes page to make it easy to share your memories.

Send flowers to the Lawson family.