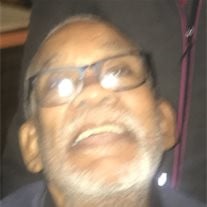 Stephen Anthony Gaskin, born October 15th, 1941, Fitts Village, St. James, Barbados, W.I. died on December 22nd, 2020, Passaic, New Jersey, after a long battle with health issues. Stephen was born to Adolphus and Ivy Gaskin of St. James, Barbados. He was raised in a deeply religious family, hence Stephen was well versed in biblical scriptures. Upon completing his education studies in Barbados, Stephen immigrated to the United States to further his educational goals. With his thirst of knowledge, he completed his education at Columbia University in New York, achieving a Master’s degree in Industrial Engineering. After graduation, he was hired at Singer Kearfott, Little Falls, New Jersey as a Quality Control Manager. From the time Stephen was a young boy into adulthood he was active in sports. Especially cricket, so much so he was an active member and President of the New York Metropolitan Cricket Association for several years. After relocating from New York, Stephen made the City of Passaic, New Jersey his permanent residence for over 35 years. Stephen is survived by his loving and devoted wife of 47 years, Judith Gaskin, who he would affectionally called, Ann. Their loving and adoring two daughters, Stephanie Gaskin and Sherri Gaskin. Stephen is also survived by his nine siblings, Eudora Gaskin, Marcia Sealy, Jennifer Gaskin, Jervis Gaskin, Paul Gaskin, Gregory Gaskin of Barbados, W.I., and Evon Payne, Jovial Gaskin and Romero Gaskin of Boston, Massachusetts. He is also survived by his many nieces and nephews. Brother-in-law to the Holder family of Cliff Cottage, St. John, Barbados, W.I. Cousin to the Fenty and Jordon families of St. James, Barbados W.I. Cousin to the Gibson family of Queens, NY. Stephen was a friend to many, highly respected and always willing to share a gem of wisdom. Stephen is with the Lord, we wish him enteral peace and rest. Stephen Anthony Gaskin with forever be loved and missed dearly. To send flowers to the family or plant a tree in memory of Stephen Anthony Gaskin, please visit our Heartfelt Sympathies Store.

The family of Stephen Gaskin created this Life Tributes page to make it easy to share your memories.

Send flowers to the Gaskin family.