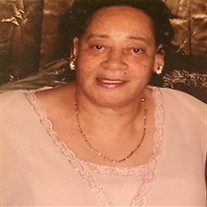 Sally Virginia Burns was born in Cumberland, Va. on January 8, 1940, to the late Lucy (Johnson) and Perry M. Davenport Sr. When she was a young child, her parents relocated to Paterson, N.J. Sally grew up in Paterson and accepted Christ and was baptized at an early age. Sally graduated from the Paterson Public School System. Having always had a passion for education, she attended Passaic County Community College in Paterson where she pursued her educational desires. She studied anything that interested her. One of her interests was in Real Estate and she took courses and received her Real Estate License. She was a self-taught individual and mastered skills dealing with business, typing, computers, medical coding, and billing. Early in her career, she worked for the U.S. Postal Service in Paterson. When she left, she utilized her skills in medical coding and billing to become a specialist in this field at Sall Meyers, (Paterson). Sally was so knowledgeable, well-liked, and respected at Sall Meyers that even after she retired, they continued to employ her as a part-time employee for many more years. In addition to her career in the medical field, Sally was also an entrepreneur who ran a small business from her office at home selling a variety of useful wares. She met and married the love of her life; Henry Burns and they were married for 57 years. To this union, three children were born, Rashad, Larry, and Valerie. Sally loved the church and joined Madison Avenue Christian Reformed in Paterson. When her health began to decline, she watched her religious services from the comfort of her home. Sally was a quiet homebody, had faith in God, and provided valuable advice, prayers, and financial blessings to many charities. She was a cheerful giver who believed in giving a helping hand to anyone in need including sponsoring children in the USA and abroad. Sally and Henry hosted Thanksgiving Dinner annually where all were welcome. Known for her cooking skills, she prepared delicious turkeys, sweet potato pie, jello, and all desserts for the soul. Sally was a big morning and evening show enthusiast. She enjoyed watching western shows and her daytime soap dramas, “The Young and the Restless” and “Days of Our Lives”. She was a collector of beanie babies, dolls, and coins. She made her Heavenly transition on March 27, 2022. She was prepared and ready when her hour of departure came. She fought a good fight. She finished her course. She kept the faith. Henceforth there is laid up for her a crown of righteousness. Sally was preceded in death by her loving husband Henry Burns, parents Perry Sr. and Lucy Davenport, mother-in-law Blanche Burns Rosborough, sisters Colene Mayo, Ira Moore, Marion Wood, brother Perry (Junie) Davenport Jr., brother in laws James Wilson Mayo, Benjamin Miller, Sr., Jasper (Larry) Lowery, Rev. Dr. Richard Wood, and Jerry McClure, nephews, Benjamin Miller Jr., Clinton Battle and John Hogan, and her bestie/cousin the late Vera Johnson. She leaves cherished memories to her children Rashad (Jhia) Shabaka-Burns of Ewing, N.J. Larry Burns of Smyrna, Delaware, daughter Valerie Monique (Van) Williams, of West-Orange, N.J., stepson Efrain Harrison of Costa Mesa, CA., grandchildren Meosha Wright Burns of Rahway N.J., Larry C. Burns Jr., Henry Burns, Zaharra (Fiancée Rashon Blake) Burns, all of Paterson, N.J., Maliik (Girlfriend Shannon) Burns of Henrico, VA., Victoria (Kenny) Bennett of Gainesville, Florida, Van III and Vanna Williams, of West Orange, N.J., Jerry (Alexa) Morrison of High Bridge, N.J., Robert Pleasant of Paterson, N.J., great grandchildren Luna Rae Blake of Paterson, N.J., Aubree Rose Bennett of Gainesville, Florida, Ava, Kia and Kaden Morrison of High Bridge, N.J., Titan Pleasant of Paterson, N.J., sisters Vera West Miller of Belleville, N.J., Shirley Davenport of Orange, N.J., Lucy (Cookie) Lowery and Carrie Davenport, both of Paterson, N.J., sister-in-law Belinda Brown-McClure of Kernersville, N.C., brother-in-law Stanley Moore of Bumpass, VA, loving mothers of her grandchildren Jacqueline Wright of Jersey City, NJ, Susie Morrison of Newark, N.J., and Veronica White of Paterson, N.J., special cousins Arlene and Willie Brown of Mt. Pleasant, S.C, Mary Cornish of Bound Brook, N.J., William (JoAnn) Burns of Morristown, N.J., prayer warrior Joyce Jackson, her church family and a host of nieces, nephews, relatives and friends including longtime friend Mayra Rainey of Paterson N.J., and her home care giver Tellesia Bailey of Clifton NJ. Sally will be greatly missed but her legacy of love and cherished.

Sally Virginia Burns was born in Cumberland, Va. on January 8, 1940, to the late Lucy (Johnson) and Perry M. Davenport Sr. When she was a young child, her parents relocated to Paterson, N.J. Sally grew up in Paterson and accepted Christ and... View Obituary & Service Information

The family of Sally Virginia Burns created this Life Tributes page to make it easy to share your memories.

Sally Virginia Burns was born in Cumberland, Va. on January 8,...

Send flowers to the Burns family.