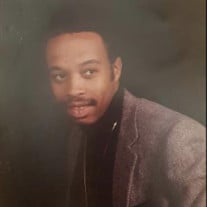 John Hogan was born in Passaic, New Jersey,on June 4, 1957, to the late Laura Hogan and the late Solomon Anderson. Our heavenly Father called John from earth to glory on Saturday,January 1, 2022. John lived most of his life in Passaic, New Jersey, before moving to Paterson, New Jersey. John received his high school diploma at Passaic High School, and upon graduation, he enter the United States Army.While there, he attended Eagle University in Fort Campbell, Kentucky.Upon completion of his Army tour, he continued his educational desires and attended night classes at Computer Learning Center in Paramus, New Jersey, where he earned his computer degree.John Hogan served in the United States Army Special Forces. After his tour of duty, he worked for and in 2019 retired from the Clifton/Wallington, New Jersey, branch of the United States Postal Service.In 2001, John was a World Trade Center 911 Ground Zero volunteer. John became an Auxiliary Police Officer in the Office of Emergency Management of Paterson, New Jersey, while still employed at the post office. A workaholic by nature, John often worked as a bouncer/security personnel at various venues. John was also a personal trainer at Strong and Shapely Gym, East Rutherford, New Jersey.John accepted Christ at an early age and was baptized; he was a former member of The Mount Moriah Baptist Church.John was a man who loved, cared, nurtured,shielded, and protected his family and friends from as much hurt, harm, and danger as he possibly could. Reflections of Life John was a family man who loved children. He loved to spoil them while teaching and preaching to them about the importance of education. As far as he was concerned, all children are his children. Years ago, John served as a Home School Council President for several years and also as an assistant basketball coach for the Grace Chapel Boys BasketballTeam. John was a generous man who always helped out financially, mentally, and by physically training others to stay physically fit. He believed in visiting the sick and comforting or doing whatever he could for the bereaved. He was blessed with artistic and handyman skills and did not mind doing what he could to help out or draw requested items as needed. He was also a man who loved to cook and show off his cooking skills by hosting breakfast, dinner, and BBQ events. In the church, he became known as one of “the men who cooks for the Mount.” He cooked at least one hundred pancakes each year for their Annual Father’s Day Breakfast. He had also previously lent his serving and cooking skills to community scholarship events. When he attended the church, he was also a member of the Mount Moriah Baptist Church Outreach Faith Ministries, Foreign and Home Missions. John was an avid sports fan. Formerly having played football himself, he became a diehard Raiders football fan who recruited all young family members to become one as well, influencing and purchasing team gear for all. John’s sports passion was in the field of boxing. A former New Jersey Golden Gloves Champion boxer himself, John had the opportunity to meet a boxer while attending a Boxing Camp in Pennsylvania. This boxer was his idol, the great Muhammad Ali, who also trained for some of his most famous fights at this camp. John met many famous boxers during his boxing career but maintained a recognizable friendship with Muhammad Ali. John won many cash awards, sport trophies, and ribbons during these tournament events. Besides sporting events, John has had the opportunity to meet many famous celebrities while working as a bouncer or doing security at different venues. He loved to read and owned an extensive magazine and book collection. John loved going to autograph signing events for comic, football, basketball, and boxing legendary greats. He was a memorabilia collector, a CD and VCR old tape, and album collector. John also loved camping and white-water rafting. He would gather friends and family members, young and old, and would organize whitewater rafting events for one and all. John enjoyed the gym and believed in physical fitness, not only for enjoyment, but for a healthy lifestyle as well. Physically fit himself, people asked him to train and instruct them, hence he became a personal trainer to the young and old. John had previously received awards from the United States Postal Service, as well as numerous certificates of appreciation and recognition from churches, the community, and the school, which nominated him for the Certificate of Special Recognition Award, which he received from the United States House of Representatives. As Officer John Hogan, he was recognized by the Municipal Council with a citation from the City of Paterson, New Jersey, for dedicated service to the city. The most cherished award received was from his 45th Class reunion, which consisted of a military coin and plaque. John was preceded in death by his mother, Laura Hogan; father, Solomon Anderson; sister, Louella Hogan; and brother, Robert Hogan. He leaves to mourn and cherish his memory: his loving wife, Karen of Paterson, New Jersey; son, Dexter Hogan of Paterson, New Jersey; daughter, Charelle Hogan of Washington, D.C.; sisters, Pamela Hogan-Coleman (Ronald), of Atlanta, Georgia, Ramona Bonilla of Douglasville, Georgia, and Laureen Ricks of Garfield, New Jersey; brothers, Pedro Hogan (Kimberly), Raymond Hogan, and Paul Bonilla, all of Riverdale, Georgia; stepfather, Pedro Bonilla of Riverdale, Georgia; and a host of nieces, nephews, other relatives, friends, and his brothers for life. John will be greatly missed, but his cherished memories will forever live in our hearts.

The family of John J Hogan created this Life Tributes page to make it easy to share your memories.

Send flowers to the Hogan family.