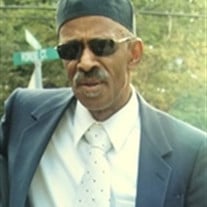 James H. “Jimmy” Hill was born in Harlem, NY at the age of 10 years old he moved to Passaic, NJ where he grew up, met and married the lady of his dream Jaqueline and raised his family. Jimmy attended the Passaic school system and worked as a taxi driver for Passaic City Taxi and Streeter Taxi both of Passaic. Jimmy and his lovely wife Jacqueline relocated to Sugar Hill, GA in 1998 where Jimmy was employed by Costco Wholesale in Duluth, GA for over ten years before he retired. In his spare time, he enjoyed playing solitaire, watching CNN, talking/lecturing and reading the Quran as well as the Bible. Jimmy was one of a kind and you just had to love him, anyone who he sat and talked to always left with a good message and definitely something to think about. After he gave you one of his lectures he would say “this one was free, the next one you’re gonna have to pay for”. When he wasn’t long winded he would say “ok, here’s the meat and potatoes” , that meant he was getting straight to the point. Jimmy also loved spending time and talking with his grandchildren and his great grandchildren as they would refer to him as their Pop Pop. There was never a dull moment when their PopPop was around. Jimmy was a loving husband, a wonderful dad, a special brother, a caring grandfather and great grandfather, an amazing father in law, a special brother in law, a loving uncle and a devoted friend. Jimmy was predeceased by his wife of forty-five years, Jacqueline Hill, his parents John Hill and Geraldine (Hill) Pickering, his stepfather James Pickering, one brother Richard (Dickie) Hill, and “Jersey” his Siberian husky dog. He leaves to cherish his memory his four sons James, Rakim, and Rahman Hill, and James Fulcher, one daughter Shaune Fulcher; Four daughter in laws Lakesh Kearney-Hill, Deanna Hill, Bonita Davis-Hill and Sharai Fulcher; Eighteen grandchildren DiAndrea, Rahminique, Danny, Tyisha, Dinaya, Shane, Japreem, Rakesha, Rakiyyah, Rahman, Rakim Jr, Dikira, Brandon, Cameron, Kyle, Samir, Isaiah, and Rahman Jr.; Sixteen great grandchildren; One brother Gabre Hiwot; three brother in laws Ernest, Quentin, and Khalil; one aunt Barbara Sykes and a host of nieces, nephews, and other relatives and friends. Jimmy also leaves to cherish his memory his long-time friends Jeffery Dye, Homer Jones, Ralph Horne Sr., Andrew Ward, Jim Bean, and his loving neighbors David and Deanna Lancaster. To send flowers to the family or plant a tree in memory of James H. "Jimmy" Hill, please visit our Heartfelt Sympathies Store.

James H. “Jimmy” Hill was born in Harlem, NY at the age of 10 years old he moved to Passaic, NJ where he grew up, met and married the lady of his dream Jaqueline and raised his family. Jimmy attended the Passaic school system and worked as a... View Obituary & Service Information

The family of James  H. "Jimmy" Hill created this Life Tributes page to make it easy to share your memories.

Send flowers to the Hill family.