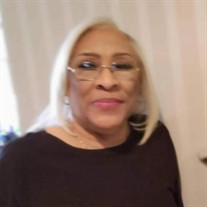 Grace Thelma Haskins (Ricks), passed peacefully from labor to rest on January 6th , 2022. Grace was born April 2 nd , 1940 in Waverly Va. To the late Walter and Elsie Mae Ricks. She was raised and educated in Waverly Va. and later employed 1957 by Richmond University Hospital as a nurse aide also, employed for 14 years as a cashier at Shop-Rite of Passaic NJ, until retirement and her final rest. Grace met the love of her life the late Frank (Sonny) Haskins Jr; the two married October 24 th , 1959 in VA. Their loving union produce seven children leaving in preceding death Franklin, Jerry, Sondra, and Jamie Haskins. Grace leaves to mourn daughter Dorothy Haskins of North Arlington NJ, Jean Haskins of Clifton NJ and son Anthony Charmaine Haskins of Irondequoit, NY. Grace was raised in a very close knitted Family that love the Lord. After the passing of her father Walter Ricks, she uprooted her family in 1965 to follow the path of her family to relocate in the city and state of Passaic, NJ. Grace and her entire Family became members of the Mt Moriah Baptist Church under the leadership and founder the late Reverend Napier and the late Reverend Boston Thomas. Until this present time under Pastoral leadership of Dr Reverend William Baskerville whom she loved dearly as her son and the followship of her Church family. She loved and lived for those she carried special in her heart. Grace stewardship to serve God led her to become a part of the Senior and Gospel choir, a member on Usher Board II and the Nurses Unit. In 1980 she helped form the family gospel singing group she named it to be “The Faithful Few”, brother James Lee Ricks as manager. Grace was one of fifteen siblings, preceded in death sister Shirley Charles McGriff, Bernice Ernest Lee Young, Mary Phillip Jennings, Barbara Ricks, brother Walter Debbie Ricks Jr, James Lee Etta Ricks, and Johnny Teddy Ricks. She leaves to mourn Hazel Alvin Dixon of Clifton NJ, Dorothy Ricks of Clifton NJ, and Juanita Ricks of Paterson NJ. Fourteen Grandchildren, twenty-two Great Grandchildren, great nieces, nephews a host of relatives and Community Spiritual children and a devoted friend Pamela Murray.

The family of Grace Thelma Haskins created this Life Tributes page to make it easy to share your memories.

Send flowers to the Haskins family.