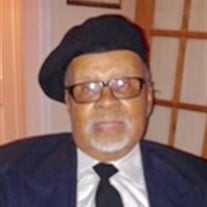 Frank Fowlkes, Jr. was born in Montclair, NJ on April 28, 1930, the oldest of four children born to Frank and Marion (Jones) Fowlkes. Frank was raised in East Orange and moved to Paterson, NJ as a young adult where he met his wife of 55 years, Minnabell (Johnson) Fowlkes. Frank and Minnabell were married on April 26, 1957 and out of their union were born two daughters, Donna Marion and Terri Jean. “Fowlkes,” as he liked to be known, was educated in the East Orange public school system, and graduated from East Orange High School in 1947. He continued to educate himself throughout the years, taking several college courses and trying to learn to speak Spanish so that he could better communicate with the growing Hispanic populations in Paterson and Passaic. Education was always very important to Frank. He instilled the importance of education into his children and grandchildren. Fowlkes joined the U.S. Military at the age of 17, where he served in the U.S. Air Force and the New Jersey Army National Guard for a total of 43 years. He retired from the military in 1990, as a Master Sergeant at Headquarters 372D Antiaircraft Artillery Group of the New Jersey Army National Guard. In addition to being in the military, Fowlkes also trained as a barber during his early years. He worked under the apprenticeship of Mr. Harris of Harris Barber Shop in Paterson, NJ. In 1958, Frank opened the Village Barber Shop on the corner of State and Aspen Streets in Passaic, NJ with his then partner James Winston. In 1959 Willie “Buddy” Bonners joined the barbershop partnership. In 1967, Leon Miller was added to the team, and James Winston passed shortly thereafter. Fowlkes, Miller and Bonners were partners in the “Shoppe” for 58 years. After Fowlkes had his right leg amputated and was no longer able to stand to cut hair, he frequently visited the Shoppe to spend time with his partners and former customers. The Village Barbershop and Fowlkes have always been a strong pillar of the Passaic community. Brother Fowlkes was a Mason for over 25 years. He joined Grammatic Lodge No. 2, Accepted Free and Accepted Masons, Brooklyn, New York in 1968. During his years of service, he was Worshipful Master of the Lodge, Grand Treasurer of Doric Grand Lodge A.F. and A. M., a member of St. Marks Chapter, Royal Arch Masons, St. Andrew Commandery of Knights Templar, Victor S. Lori Lodge of Perfection, St. Paul Consistory 320; Potentate of Sahara Temple; Nobles of the Mystic Shrine, and he was elevated to Illustrious Grand Inspector General, 330 in Robert A. Spence Grand Council of Deliberations. He was also elected President of the Board of Directors of Lodges and Chapters of the 2nd Masonic District, Inc. Throughout his life, Fowlkes always had a zest for learning and trying new things. In addition to his military and barber careers, Fowlkes trained as a mortician, a travel agent, a limo driver, a school crossing guard and more. However, his most enjoyed and proud role was that of being father to Donna and Terri, and grandfather to Jared (“Bubbles”) and Jada (“Bounce”), who all affectionately call him “Popi.” In recent years Fowlkes experienced a series of illnesses, but he was always a fighter, and able to bounce back. He maintained a positive attitude and never let his illness and disabilities get him down! He always remained encouraged. Fowlkes lived in both South Orange, NJ with his youngest daughter, Terri, and granddaughter, Jada, for part of the year; and lived in Streamwood, IL with his oldest daughter, Donna, and grandson, Jared, for part of the year. He prided himself on having two homes - a winter/spring home in NJ and a summer/ fall home in IL. Fowlkes enjoyed traveling and instilled the love of travel in his children and grandchildren. He would frequently take his family on vacation throughout the U.S., Canada, Mexico and the Caribbean. The most recent family vacation was to St. Thomas, Fowlkes’ favorite island destination, in June 2016. Fowlkes transitioned from this life on Tuesday, February 14th, 2017 in Hoffman Estates, IL. He went on to have a Valentine’s Day Dance with his wife Minnabell who preceded him in death on November 3, 2012. To mourn him he leaves his daughters Donna (IL) and Terri (NJ), grandson Jared, granddaughter Jada; sisters – Delores Fisher (AZ) and Katherine Sanford (FL), brother – Percy Fowlkes (NJ); best friends and partners Leon Miller and Willie “Buddy” Bonners; and a host of nieces, nephews, family members and friends. Frank Fowlkes' favorite color was red! Popi / Uncle Frank / Junior / Fowlkes – you will surely be missed! To send flowers to the family or plant a tree in memory of Frank Fowlkes Jr., please visit our Heartfelt Sympathies Store.

Frank Fowlkes, Jr. was born in Montclair, NJ on April 28, 1930, the oldest of four children born to Frank and Marion (Jones) Fowlkes. Frank was raised in East Orange and moved to Paterson, NJ as a young adult where he met his wife of 55 years,... View Obituary & Service Information

The family of Frank Fowlkes Jr. created this Life Tributes page to make it easy to share your memories.

Send flowers to the Fowlkes family.