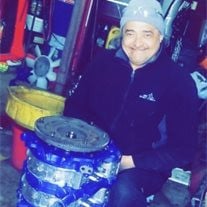 On Tuesday, April 28th, 2020, Eligio Maisonet Martinez, known to many as Papo, passed away at the age of 53. Born on August 16, 1966 in Manatí, Puerto Rico, the first son of both Eligio Maisonet Maisonet and Ramona Martinez Gonzales. He grew up in Barceloneta, Puerto Rico with his 5 sisters, 2 brothers and his mother. Growing up for him was no easy task but he would always use those memories of his youth to make sure that his family had a better life. In 1984, he flew from Puerto Rico to Passaic, New Jersey where he went to spend more time with his father, his father ´s wife, which he considered like a mother, his 3 brothers, and his little sister. In 1989 he married his beautiful caring wife, Teresita Vazquez Vidot, and by the following year, not wasting any time, they had 2 daughters, Leila Yesenia Maisonet and Tereli Maisonet. Papo would spend the rest of his life living in Passaic. Always waking up at the crack of dawn, Papo would spend his days working whether in a car, in the house or in his actual job. A car enthusiast from a very young age, he loved to drive fast and mess around with cops whenever he could. Sometimes he would throw a kiss and wink at them just to see if they would go after him. People knew him most for the brutal honesty, the hard work, the strength he had and the great jokes he would tell. There was also the other side of him, the one that would tell you to learn all you can, to be self independent and always help people out. Even though to many he will always be known for his attitude, his stubbornness, we all know that it was always just tough love. Papo always had a big heart. As a warrior of life, he did everything possible to leave a good impression of himself in this world. He will be missed greatly by all that knew him. Eligio was preceded in death by his mother, Ramona. His legacy still lives on in his wife, Teresita, his 2 daughters, Leila and Tereli, his grandson, Jeremiah, his father, Eligio, his siblings, as well as his nieces and nephews.

On Tuesday, April 28th, 2020, Eligio Maisonet Martinez, known to many as Papo, passed away at the age of 53. Born on August 16, 1966 in Manatí, Puerto Rico, the first son of both Eligio Maisonet Maisonet and Ramona Martinez Gonzales. He grew... View Obituary & Service Information

The family of Eligio Maisonet Martinez created this Life Tributes page to make it easy to share your memories.