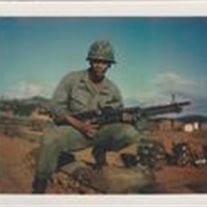 Eddie aka Eddy “Rip” Lee Barrow 69 years of returned to God’s loving arms on March 29, 2015 at Compassionate Care Inpatient Unit at St. Francis Medical Center in Trenton, NJ; Born to the late Gertrude Meadows and Harvest Barrow in Lafayette, Alabama.Eddie resided in Passaic most of his life before moving to Ewing, NJ. several months ago. Eddie worked as a driver for Hudson Paper Company of Clifton, NJ; and Two Guys Company of Garfield, NJ; for several years. He was a Vietnam veteran serving bravely in the Army branch from 1966 to 1968 where he was honorably.discharged Eddie was a member of VFW Post #10117 of Passaic, NJ. . He was a good hearted person always helping his family and friends, his hobbies were going to the racetrack and being around his friends and family. Eddie is predeceased by one brother J.B. Meadows and one sister Minnie Meadows. He leaves to cherish his memory: one son Timmy M. Barrow of Henderson, N.C. two daughters Kellie Barrow of Henderson & Dana Clemmons of Ewing, NJ; one step daughter Tamika Hall of Ewing, NJ; one step son Troy Logan of Henderson , His brother Eugene Morgan of Birmingham, AL; three sisters Hattie Walker and Ethel Powell both of Passaic, NJ, and Betty Holloway of Union Spring, AL, one brother in law Roosevelt (Junior) Powell of Passaic, his former wife regina (Logan ) Barrows of Henderson N.C.. eight grandchildren and a host of loving nieces,nephews, cousins, and loving friends To send flowers to the family or plant a tree in memory of Eddie aka Eddy "Rip" Barrow, please visit our Heartfelt Sympathies Store.

The family of Eddie aka Eddy "Rip" Barrow created this Life Tributes page to make it easy to share your memories.

Send flowers to the Barrow family.