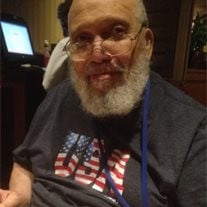 Donald O. Jordan (aka Sol) returned to God’s loving arms on Palm Sunday, April 5th, 2020 at the Hamilton Plaza Nursing Home and Rehabilitation in Passaic, NJ. Born in Boston, Mass., to the late Mrs. Fannie Louise Ramos. He spent his early childhood between Atlantic City, NJ, Norfolk, Va and Boston, Mass. He was educated in the Atlantic City public school system and the Boston public school system graduating high school in Boston, Mass. He was friends with Malcom Little who later became known as Malcolm X to the world. He was united in holy matrimony to the late Mabel Mann on November 25th, 1950 in Passaic, NJ. Donald spent the next 5 years serving our country in the Army, during the Korean War with 187th Airborne regiment and was honorably discharged in 1956. As a ranger in the U.S. Army, he served as a parachutist in special operations which prepared him for his career in law enforcement at the United Nations. He spent most of his adult life in Passaic. He lived 17 years in Willingboro, NJ with his wife of 59 years until after her passing in 2008 when he returned to Passaic. He retired from the United Nations in New York City with a distinguished career of 37 years achieving the rank of captain over the secret service force and security detail protecting dignitaries such as presidents, kings, queens and political activists. He was the first African American to achieve such a rank in the secret service and security in the United Nations. He was honored to meet 2 Popes in his career as well as people he most admired such as President John F. Kennedy, Mrs. Coretta Scott King, women’s activist, Gloria Steinham, and Cuba’s president Fidel Castro who extended an open invitation to Cuba. Sol was also a photographer and contributed regularly to the New York Times, Newark Star Ledger, Passaic Herald News, and the Paterson and Passaic Police depts and insurance companies for special cases and he was often the photographer for many weddings during the 1960s and 1970s. He also taught photography at John Jay College in New York. He was a Past Master of Free Masons holding office during 1967-1968 at the Silver Star Lodge, #45 in Passaic. He was predeceased by his loving wife, Mabel Mann Jordan in 2008 and 3 children, Donna, Michele, and Patricia and grandson Donald O.D Jordan, Jr.,1 brother Nicholas. Donald (Sol) Jordan leaves to cherish fond memories through 3 remaining children, Donald O.D Jordan, Sr (Dianne) of Stone Mountain, Ga, Laurie Joye (Eddie) and Gabriella Jordan of Passaic. He is also survived by 9 grandchildren, 36 great grandchildren and a host of great great grand-children. 3 sister-in laws, Mrs. Dorothy Thorne, Mrs. Charlene Mann and Mrs. Geraldine Mann 1 sister in law Juanita Jordan of Atlantic City, NJ and a host of nieces, nephews, cousins and friends.

The family of Donald Orville Jordan created this Life Tributes page to make it easy to share your memories.

Send flowers to the Jordan family.