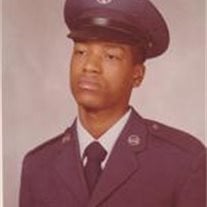 David Nealy was born on August 5, 1958 in Passaic NJ. He was affectionately known as “Block” to those that knew him back in High School. David graduated Passaic High School in 1976 and in the same year. David decided to Join the United States Air Force, stationed at George AFB, Victorville CA., as an Administrator Specialist. During his time in the service, David attended Victor Valley Community College. In 1981, after completing the Air Force, David proceeded to continue his education at the Aerospace Corp, studying “Wang Word Processing, fall of 1981. In 1983, David studied at El Camino Community College “Bus Adm/Psychology. In 1988 David studied Computer Processing Institute, Paramus, NJ. David worked for Aerospace Corp as a Sr. Classified Document Control Clerk. Schiffenhouse Corp as a Data Entry Inventory Control Clerk. LCS Industries as a Computer Operator. David was preceded by his loving father Reginald Nealy, brother Gregory Nealy, Aunt Mildred Johnson, loving grand parents, Viola Smith, Melvin Smith (Sr,), John Giles, Hattie Giles, Uncle Melvin Smith, Mother In Law Margaret Gerena. David leaves to Cherish his Wife, Iris Nealy, children, Tyrik Nealy, Myesha Nealy, step son, Ramon Marshall, loving mother, Yvonne Nealy, loving brother, Ronald Nealy, sister in law, Linda Barber, Lucia Gerena, Michelle Nealy, brother in law, Herman Soler, Alberto Soler, Carlos Soler, Nephew Kyle Nealy , Lisa Logan mother of Sharif Nealy, Orien Nealy, Sherie Nealy, Great Nephew Sean Nealy, Gregory Nealy's Daughter Mo-Nique Nealy, Host of Aunts, Uncles, Cousins, I would love to name a few that David was very fond of his loving cousins Wanda Leake, Sharon Johnson- Harrison, Robert Harrison and a brother in law Charles Barber, Sharma Johnson(baby cuz), Pam Johnson, three special friends: Papo (POP's), Tony, and Pops, Poem: One day in Passaic High School back in 1975, this young man came to my locker and said to me “Hi” my name is David, what's your name. I replied back “I don't know you” Well David excused him self and left. Because David is very persistent in his own little way, he came back to my locker another day. I could not help but to give him my name, Iris, I said to him. Since then 40 years passed to were still by each other side. David was my light, my strength, my admiration, my successor, my foreseer, etc. We have two beautiful children and a step child that he cherished with all his heart, there was nothing he would not have done for them. David was a reserved man, full of knowledge and wisdom beyond expectations. He used to be in the computer for many hours researching and learning, his specialty was “black history” he went deep. David was a beloved son to his mother, Yvonne Nealy. When she was ill he stood by her side along with his brother Ronald. David was reserved but very humbled and caring. We have a Miniature Poodle, “Midnight” David trained and raised Midnight as his own.... they were two pees in a pot, everyone in Paterson knew where David was so was Midnight, I know Midnight cannot communicate with us via language, but his face and motions speak for itself, he sense David is not around and is very sad these days. So David!!!! I'm hear to tell you don't worry we have Midnights back just like you did. David was pure of Heart, everyone that came across his path respected him as he respected them all. His kids were very important to him, he wanted so much to instill all the knowledge he had to them and everyone else who wanted to learn. He just loved to learn so much about everything, religion, health (he was real big on health), David loved to exercise and walk. His love will remain deep in our hearts. David left us suddenly but his spirit will live FOREVER Until we meet again my dear, Rest in Eternal Peace. Your loving Wife, Children and Family, To send flowers to the family or plant a tree in memory of David "Block" Nealy , please visit our Heartfelt Sympathies Store.

David Nealy was born on August 5, 1958 in Passaic NJ. He was affectionately known as “Block” to those that knew him back in High School. David graduated Passaic High School in 1976 and in the same year. David decided to Join the United States... View Obituary & Service Information

The family of David  "Block" Nealy created this Life Tributes page to make it easy to share your memories.

Send flowers to the Nealy family.