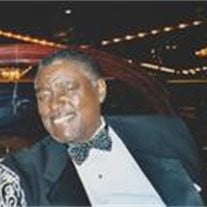 Curtis Harry was born August 18, 1928 to Odessa Glover and Arthur Harry in Phoenix Arizona. He attended the schools in Phoenix and California. Upon graduating he enlisted in the Army and fought in World War 11 from March 1946 to March 1948, receiving a honorable discharge and was decorated with victory medals. He also served in the Korean War as a medic in the Seventh Cavalry Regiment from 1950 unto 1952. He was dedicated to the U.S Armed Forces and loved attending the reunions. He loved telling stories about the war and how his position as a medic was far and few for Black soldiers. He remained in contact with his war buddies over the years and received updates and pictures especially from reunions that he was unable to attend. He was an avid contributor to Veteran organizations. Curtis also has a passion for the Arts. As a young man he studied acting and performed plays with various ensembles including the American Negro Theater. He enjoyed the early days being mentored by the great ones like Ruby Dee. These were memorable times that put a sparkle in his eyes. In later years he joined the H.A.D.L.E.Y Players and performed many plays throughout Harlem under the leadership of a phenomenal woman Gertrude Jeannette. He was so grateful that although he was unable to attend her 101st birthday celebration in November 2015, he delighted in having been able to attend the 100th birthday party in 2014. He was also ecstatic to be able to attend a performance three years ago that he had acted in the original cast 35 years ago. Although acting was rewarding and fun, Curtis married Doris Warner affectionally known as Bootsie on June 1963 and he provided for his family by working at the US Post office for 35 years. He and Bootsie traveled to St. Marteen every year with close friends right up to her home going in October 2008. He enjoyed visits and phone calls from his Bethel church family and attended service whenever as he would say “his legs were feeling like taking up the steps”. Curtis fought a good fight over the past five months. Despite his struggle he was able to find humor during his condition. Unfortunately the illness spread rapidly and his body was in too much pain to keep up the battle. He is at rest now because God knows best. Curtis leaves to mourn, a son Michael Harry ( Yvonne), daughter Doreen Mitchell, a son Richard Harry who preceded him in passing giving him a bonus daughter-in-law Joyce Green (Joseph). Grandsons Kalik, Sebastian, Marshall, and John. Granddaughters Erica, Caroline, and Stacey. Cousins Betty Jackson, Alvin Owens and Geraldine and many other relatives and live long friends. To send flowers to the family or plant a tree in memory of Curtis Eugene Harry, please visit our Heartfelt Sympathies Store.

Curtis Harry was born August 18, 1928 to Odessa Glover and Arthur Harry in Phoenix Arizona. He attended the schools in Phoenix and California. Upon graduating he enlisted in the Army and fought in World War 11 from March 1946 to March 1948,... View Obituary & Service Information

The family of Curtis  Eugene Harry created this Life Tributes page to make it easy to share your memories.

Send flowers to the Harry family.