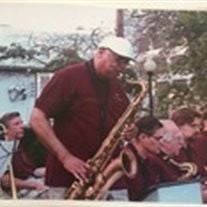 October 2, 2017. Conrad Nelson Brown Sr. left us as he passed away October 2nd 2017 due to complications from pneumonia. Conrad was born in Newark, New Jersey and was currently residing in Rockland County, New York. He was raised in Paterson, New Jersey, where he lived for approximately 22 years, and then in Passaic, New Jersey for another 14 years before moving to Rockland County in New York State. Conrad graduated from Eastside High School in Paterson and attended Hampton Institute in Hampton, Virginia where he was a music major. As a music major at Hampton, Conrad learned to play a variety of instruments to include the flute and clarinet but always remained true to his first love, the saxophone. He played both tenor and alto saxophones in bands during his time at Eastside High School and in college. Conrad also formed or was a member of several local bands in the Tri-State area to include Conrad Brown & the Hi-Notes, Artie Lewis & the Hits, and Nate White and his Swingsters. His talent spanned several decades and several different musical styles as evidenced by his membership in a number of Top Forties’ bands, jazz, swing, and concert bands. Conrad’s love for pure jazz was unmistakable as a member of Reflections Jazz Ensemble. He was truly a student of jazz, and was also a member of the Rockland County Concert Band. Upon graduating from high school, Conrad worked for the Continental Can Company in Paterson before landing an entry-level job as a computer operator at IBM in 1967. His technical prowess became readily apparent at IBM as he eventually moved his way up the ladder, becoming a computer programmer, a programming analyst, and finally promotion to manager where he retired from the Sterling Forrest, Tuxedo, New York facility in July 1987. After his retirement from IBM, Conrad was able to devote his energies full-time to music. He was a self-employed music teacher who believed and encouraged learning is a never-ending process. Practicing what he preached, Conrad sought out Mr. Bill Sheiner, legendary saxophone teacher to the likes of Stan Getz, to continue his studies. Although Mr. Sheiner was officially retired, Conrad was able to coax him out of retirement and teach this virtually self-taught saxophone player. Conrad continued his music studies well into his 60’s as well as laboring on a book, a sort of “How To Guide” for Jazz Saxophone. A devoted volunteer, Conrad was a member of the United Church of Spring Valley where he was the head cook, providing meals to the members of the community, a Sunday school teacher, and a volunteer with the Salvation Army. Conrad was predeceased by two wives: Dolores K (Mann) Brown, Sheila (West) Brown; And is survived by 2 sons and 2 daughters, 2 daughters in-law, 2 sons in-law: Conrad N Brown, Jr., Nelida Brown of Oceanside, CA Allan Brown, Nicole Brown of Passaic, NJ Karen (Brown) Feliciano, David Feliciano of Oceanside, CA Laurie Ann (Brown) Villa, Jason Villa of Waterbury, CT He is also survived by: 1 brother – Howard Brown, 2 sister-in–laws Velda Brown and Mary Brown 1 step son and his wife – Hayden West and Jenn West of Nazareth, PA 1 step daughter – Lauren Parker of Bowie, MD Seven Grandchildren: Joshua Feliciano Allan Brown, Jr Justin Feliciano Portland Brown Jordan Feliciano Ashley Brown Kaia Villa Five Great Grandchildren: Kayona Feliciano Kayliah Feliciano Kaylani Feliciano Henry Winch Joaquin Feliciano Predeceased by: Garnetta and Howard Brown, Sr (parents) Dorothy Brown (sister) David Brown (brother) To send flowers to the family or plant a tree in memory of Conrad Nelson Brown Sr., please visit our Heartfelt Sympathies Store.

October 2, 2017. Conrad Nelson Brown Sr. left us as he passed away October 2nd 2017 due to complications from pneumonia. Conrad was born in Newark, New Jersey and was currently residing in Rockland County, New York. He was raised in Paterson,... View Obituary & Service Information

The family of Conrad  Nelson Brown Sr. created this Life Tributes page to make it easy to share your memories.

Send flowers to the Brown family.