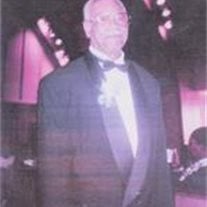 Clifton “Cliff” Morrell Jr. , son of Clifton Morrell Sr. & Lucy Ford Morrell, went to be with God on December 13, 2016. Cliff was born in Eufaula Alabama on June 13, 1932. He left Alabama at the age of 16 residing in Brooklyn New York for over 10 years before moving to New Jersey where he lived the remainder of his life. During his life Cliff had two passions; Music and working on automobiles. His profound love for music helped to organize the music department of Calvary Baptist Church of Garfield. He also served as Choir Director at St. Paul’s Baptist Church in Passaic and various other churches in the New York and New Jersey Metropolitan area. He later formed The Corinthians Gospel Singers who earned a recording contract with Savoy Records. Four singles were released from their album between 1958-1960. He continued to perform at local churches for years. Following his passions, he later worked for over 30 years in the auto industry serving as a salesman, mechanic & Manager for various car dealerships. Cliff loved to travel… Some of his favorite places to visit were Las Vegas, Grand Canyon, San Francisco and Rome Italy. Regardless of where he was he could always be found with a lit Cigar and a pocket full of hard candy. Cliff is predeceased by his 8 siblings: John Henry, Preston, Thomas, Darnella, Rodella, Magnolia and Viola with Cliff as the youngest. He is lovingly survived by his Wife, Barbara Sykes-Morrell of Passaic, six children Darnella of Garfield, Warren of Montvale, , Craig of Clifton, Jason of Baltimore, Maryland, Tracy and Chad of Texas and predeceased by John Kirk. He is also survived by 8 grandchildren and 1 great-grandchild. Funeral Arrangements by The Madonna Multinational Home for Funerals, Inc. To send flowers to the family or plant a tree in memory of Clifton Morrell, Jr., please visit our Heartfelt Sympathies Store.

Clifton “Cliff” Morrell Jr. , son of Clifton Morrell Sr. & Lucy Ford Morrell, went to be with God on December 13, 2016. Cliff was born in Eufaula Alabama on June 13, 1932. He left Alabama at the age of 16 residing in Brooklyn New York for over... View Obituary & Service Information

The family of Clifton Morrell, Jr. created this Life Tributes page to make it easy to share your memories.